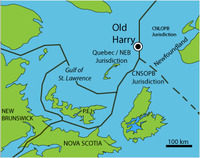 As stated by the David Suzuki Foundation “According to the current legislative processes in place, the boundaries of the five gulf provinces (Quebec, Newfoundland and Labrador, Prince Edward Island, New Brunswick and Nova Scotia) are established by artificial legal borders in order to allow offshore hydrocarbon development. This means that these different jurisdictions issue hydrocarbon prospecting and operating licenses independently from one another.”
(Note that this map, and many others exclude representation of First Nations’ claims to the Gulf of St. Lawrence.)